The armadillo is native to both North America and South America, although only one species of Armadillo is found in the United States.

The average armadillo measures around 30” in length, including the tail but the giant armadillo can grow to more than 36” long and the miniature pink fairy armadillo (the smallest armadillo species) only gets to around 4” in length.  There are around 20 species of armadillo still existent on the American continent with the nine-banded armadillo being the only species found outside of the South American tropics.

The armadillo has a hard outer shell and can curl up into a ball leaving no soft body parts exposed to danger (a bit like a woodlouse). The armadillo also has long claws which the armadillo uses for digging burrows and hunting for insects in the earth. 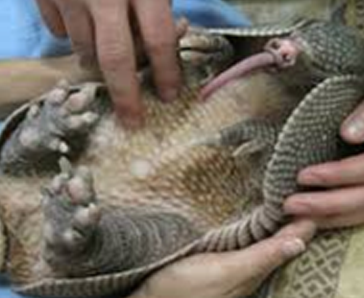 Despite the armadillo’s odd shape, most armadillos can also reach a top speed of nearly 30 mph so can easily outrun most predators. The primary predators of the armadillo are bears, wolves, wildcats and cougars.

The armadillo has very poor vision which makes the armadillo somewhat vulnerable in its environment. The armadillo’s armor is formed by plates of bone covered in relatively small overlapping scales. The scales of the armadillo are known as scutes and these scutes are made up of bone with a covering of horn.

Female armadillos give birth to around four young which are born after a gestation period of three to four months. After birth, the baby armadillos remain in the burrow for a few months, only feeding on their mother’s milk. They then begin to forage with the mother, eventually leaving after six months to a year. Some species of armadillo are known to reproduce every year so a single female armadillo can produce up to 56 young over the course of her life.