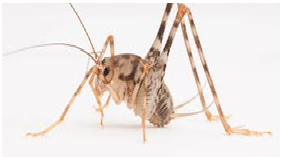 Camel crickets and closely related cave crickets belong to a large group of insects. They are found throughout the world with over 100 different kinds found in the United States and Canada. Unlike many other types of crickets, the camel crickets do not chirp. They have no sound producing organs.
They do have chewing mouthparts, like other crickets, and can feed on many different kinds of animal products, plants, fabrics and even other insects. Though they are mostly considered just a nuisance pest, they can cause some damage, especially if they occur in large numbers. Indoors, they can damage fine fabrics and houseplants. Outdoors, they can damage plants, fabrics on lawn furniture, and have even been reported feeding on clothing on a clothesline.
Camel crickets have an unusual humpbacked appearance with heads that are bent downward between their front legs. Their antennae are much longer than their bodies and their large hind legs make them very strong jumpers. Adults do not have wings and range in size from ½ to 1 ½ inches in length. Most species are light tan to dark brown in color. The immatures are similar to the adults in appearance, except they are smaller, and the female young do not have a developed and noticeable egg-laying device at the end of their abdomen.
Most of the crickets in this group are active at night and are attracted to areas with high humidity and moisture. Outdoors camel crickets and their cave cricket cousins are found in wood and stone piles, tall grass and weeds, hollows of trees, holes in the ground, and of coursecaves. When found indoors, camel crickets will often be in damp basements, crawlspaces, or garages. When conditions are dry, camel crickets may be found in unusual places as they seek moister locations. Under such conditions, they may be found in the living areas of buildings, especially laundry rooms and bathrooms where humidity is higher. 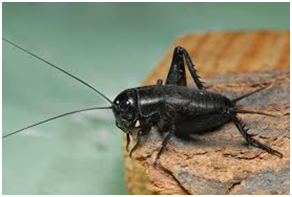 Field Crickets are the crickets everyone sees and hears in late summer and fall. They grow up to an inch long, and are black and brown. They have large hind legs and two cerci.
Field Crickets live mostly in fields and forest edges.
Field Cricket eggs hatch in the spring, usually May. Young crickets are called nymphs. Nymphs eat a lot and grow quickly. They will molt eight or more times as they grow up. With each molt, the nymphs look more and more like an adult. Young nymphs basically look like a cricket with no wings.
Field Crickets eat plant material, especially seeds, small fruits, and living and dead insects. If they are really hungry, they will even eat each other!
Once Field Crickets are fully grown they will look for a mate. Male crickets sing and dance to attract females. The song is made by rubbing the front wings together. Females hear the song through tympanum on their front legs. Once a female approaches a male, he will do a move back and forth in a sort of courtship dance. 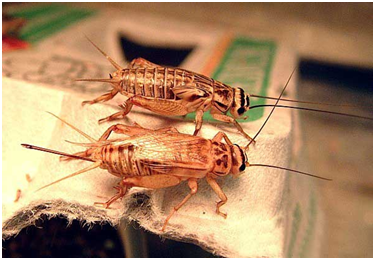 House crickets are closely related to the Grasshoppers and locusts, and like them they have the hind legs which are modified for jumping. They have two pairs of wings of which only the back pair are for flying. Nowadays they are more likely to be found in warm ducts and in paneling behind heating installations, quite frequently in breweries. Another way that house crickets get into domestic premises is when the occupants keep exotic pets such as tarantulas and lizards. These types of pets have to be fed live food and the poor old house cricket is the answer, however, if the owner isn’t careful the live food tend to make a getaway and disappear over the horizon, not really, they usually get under the floorboards and drive the occupants mad with their chirping
Crickets need warm temperatures of at least 80°F. Nymphs held at 80°F require up to 60 to 65 days to mature, while those held at 90°F require only 30 to 35 days to complete development.
They have a characteristic chirping noise
It is only the male cricket that sings that sings and he does so to attract the females. Each male sits in his own little territory and sings. When they stridulate, or chirp, crickets rub the teeth on the sharp edge of one wing against a particularly thick and rough scraper on the opposite wing, using it as a bow. As the temperatures rises, crickets’ songs become louder and faster. With some species, it is possible to precisely determine the temperature simply by calculating the frequency of their chirps. The male also has a sharp aggressive piping note, which is heard when another male tries to enter its territory.
Crickets feed on almost any kind of organic matter. They prefer soft plant matter, but will also eat other insects and carrion. 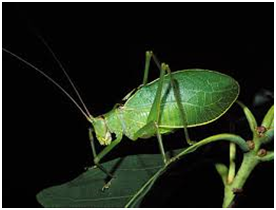 True Katydids are relatives of grasshoppers and crickets. They grow over two inches long and are leaf-green in color.Katydids have oval-shaped wings with lots of veins. They resemble leaves.True Katydids live in forests, thickets, or fields with lots of shrubs or trees. Katydids spend most of their time at the tops of trees where most of the leaves are.
Usually katydids are heard, but not seen.
Unlike grasshoppers and crickets, both male and female katydids make sounds. They rub their forewings together to “sing” to each other. Katydids hear each other with ears on their front legs.
Katydids can fly short distances when threatened, but they prefer to walk and climb. When they do fly, it is more of a downward flutter. If a katydid lands on the ground, it will walk to the nearest tree and climb.
Predators of True Katydids include birds, bats, spiders, frogs, snakes, and other insect-eaters. 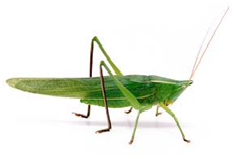 Cone Headed katydids are medium-to-large up to 2”, grasshopper-like insects with oversized jaws. They are the only katydids that have the head produced into a pointed or rounded cone that projects beyond the basal antennal segments. Most species have long, narrow forewings and, with the aid of the concealed hindwings, are strong fliers; a few species have abbreviated forewings and are flightless. 22 species occur in America north of Mexico. All occur in the eastern United States and only 3 species have been found west of Texas. 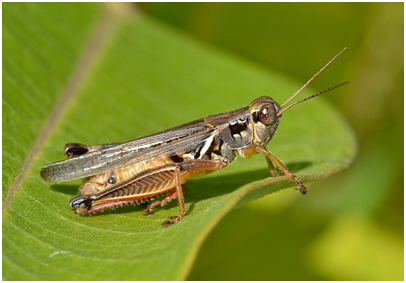 This grasshopper overwinters as eggs in the soil. Eggs hatch throughout the spring and early summer. Nymphs feed and grow for about a month, molting five or six times. Mature grasshoppers mate and continue feeding on crop plants. About two weeks later, the females begin to deposit clusters of eggs in the soil. This grasshopper prefers areas of low, moist soil.
These grasshoppers are variable in color and can include shades of red-brown, yellow, dark brown, green and olive green. The hind legs are bright red or yellowish and have a black herringbone pattern.
When startled, these grasshoppers can fly for distances of 40 feet. Their flight is fast and even; they fly about a yard above the vegetation. 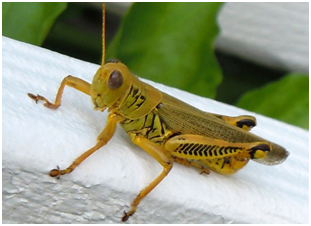